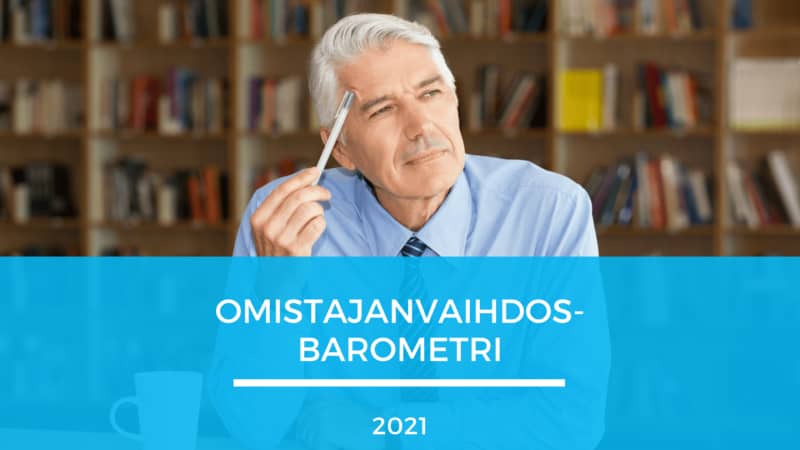 More than half of entrepreneurs over the age of 55 want to give up their business by 2024 at the latest. Over the next ten years, two in three will aim for a business acquisition or generational change, but a quarter are preparing to close down. The information appears from the Ownership Change Barometer conducted by Seinäjoki University of Applied Sciences, which was answered by more than 2,300 entrepreneurs.

The Finnish entrepreneurial field is aging: There are about 74,000 entrepreneurs in Finland who have reached the age of 55. In addition to aging, the challenges posed by the corona have also increased the willingness of entrepreneurs to give up their businesses. As supply increases, the prospects for a change of ownership are more challenging than before.

There are four alternative ways for an entrepreneur to give up a business. We examined their prevalence among entrepreneurs over the age of 55 over the next ten years:

It should be noted, however, that as many as 55% of entrepreneurs over the age of 55 plan to give up their business on a fast schedule – by 2024 at the latest.

The development activity of companies has slightly decreased compared to the previous barometer. Of course, this is not a good thing for future changes of ownership or related wishes, says Elina Varamäki , Vice Rector responsible for the research at Seinäjoki University of Applied Sciences :

“The results emphasize the importance of companies’ own development activities: the higher the company’s development intensity, the more positive its prospect of continuity. The most active in developing the new are family businesses, which are planning a generational change. ”

According to Mika Haavisto (Finnish Entrepreneurs), the project manager of the Change of Ownership Forum, the interest rate crisis partly explains the weakened change of ownership:

“Many micro-enterprises have been in a deep corona race for quite some time, and there is not enough time left for development efforts. As a result, closing down is also increasingly seen as the most likely option at the end of your entrepreneurial career. ”

According to Jari Huovinen (Confederation of Finnish Industries EK), the chairman of the Change of Ownership Forum, the situation is more acute than ever before:

“Thousands of entrepreneurs are preparing to close down their businesses – now is the last moment to break the‘ dam ’of change of ownership! The operating conditions for companies must be raised to a new level. It is also important to boost business growth, as it typically improves the prospects for continuity ”.

According to Huovinen, attention must also be paid to promoting family entrepreneurship. Despite the corona, many family businesses have invested in developing something new and thus set an example for other SMEs. Still, finding successors has also become more difficult for them. Action is therefore needed on incentive taxation, flexibility in working life, local bargaining and cutting red tape.

The Change of Ownership Barometer is produced every two years by the Ownership Change Forum, which consists of key players in the industry. The barometer is implemented by Seinäjoki University of Applied Sciences, which specializes in research in the field.

With the new year, there will also be new ways for public support for SMEs

Virpi Utriainen is the new CEO of YritysEspoo

Acknowledgment to Pentti Komssi, Procurement Representative, for the meritorious work done for the benefit of entrepreneurs

Espoo finalist in the Entrepreneur of the Year 2021 competition

Company Espoo is looking for a CEO

How can a business idea be transformed into a business plan? How is the company’s financing organized? Who helps with accounting, legal affairs or marketing?

Support for growth, development and crisis management. Company Espoo serves not only those who are planning to start a company, but also everyone who is already operating as an entrepreneur or light entrepreneur.